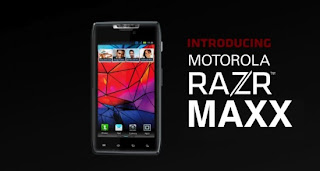 Despite the reports around the web say the new battery will make the device thicker, we could expect some kind of innovation with a flat thinner battery with more power by Motorola.
However this is what the reports say:
With all hardware staying the same, except the battery, the only way Motorola plans to differentiate the RAZR MAXX from the original is through its 3300mAh battery. Forget that it adds a bit of thickness on to the device, this thing holds some juice! A tip has gone out that February 6th will bring us a demonstration of said juice with a Motorola event that will see the RAZR MAXX bombarded with action for 24 hours straight while attempting to maintain a single charge. I for one can’t wait to see how the battery holds up.
With its large display and LTE radio, battery life was certainly a concern of the original Droid RAZR and looks to be a concern of smartphone manufacturers going forward. Rumors have placed the launch of the Droid RAZR MAXX on January 26th. It isn’t clear if news of Motorola’s demonstration has any bearing on the release of the device.
at January 17, 2012