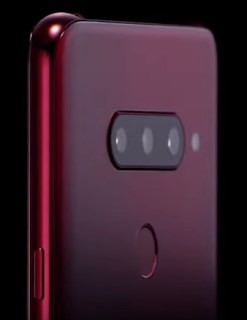 LG is clearly teasing the V40 ThinQ with PENTA cameras, 3 for the rear and 2 for the front.

On the video, LG said it used sand-blast technology for the surface of the smartphone's body, making it feel smoother in users' hands.

To give the smartphone a more simple look, the company said it concealed sensors on both sides of the LG V40 ThinQ. The product also comes with curved lines on all edges for improved design.

LG said it has reduced the bezel of the new smartphone and it will have a 6.4-inch display.

It will be released in  New Platinum Gray, Morokan Blue and Carmine Red.

The company earlier said the V40 ThinQ will come with five cameras, including standard, wide and telephoto lenses at the back. LG claims the feature will allow users to take a variety of photos without having to move about.

LG will officially showcase the smartphone on Oct. 4.