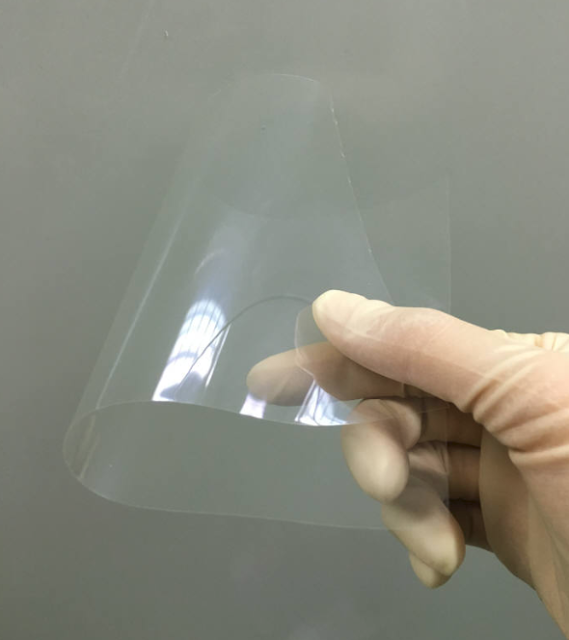 Transparent polyimide (PI) film developed by Kolon Industries. It is heat-resistant and flexible like paper, attracting attention as a next-generation display material. (Offered by: Kolon Industries.


Sumitomo Chemical will supply transparent polyimide (PI), a core material for Samsung Electronics' foldable smartphones. Transparent PI is the material that protects the foldable display. In the meantime, Sumitomo Japan and Kolon Industries of Korea compete for the supply of Samsung Fold folder. Kolon Industries equipped them with mass production equipments.

According to the industry on December 18, Samsung Electronics has confirmed Sumitomo Chemical as a supplier of transparent double-layered PI. Samsung's first foldable smartphone will be released in November and early next year.

On the other hand, transparent PI is flexible. Because it is engineering plastic, it is resistant to heat and has high durability. Unlike the conventional PI that is colored here, it was noted as a substitute material for the glass in the folded folder because it is transparent.

As Flexible Display was introduced and Samsung Electronics developed FolderBoop, it competed to develop a flexible cover window material for the global parts and materials industry. Glass makers such as Corning and Shorts also developed flexible glass and responded to folder bills. However, Samsung Electronics weighed in toward adoption of transparent PI, and Sumitomo Chemical and Kolon Industries competed for the final PI for transparent PI.

According to industry sources, Sumitomo is not equipped with mass production facilities. On the other hand, Kolon Industries invested 90 billion won in August 2016 and completed the transparent PI mass production line at the Gumi plant in the first half of this year.

It seems that Kolon Industries will have an advantageous position when the Samsung Fold folder is finally mass-produced. However, it is estimated that Sumitomo will be able to cope with the small volume of production as the folder bubble is attempted for the first time in the world. Sumitomo had many evaluations of quality ahead of other competitors.

"As Sumitomo does not have a mass production line, it is expected that it will procure transparent PIs by pilot plant or OEM (Original Equipment Manufacturer) method," said an official who knows the circumstances of the transparent PI industry. "Sumitomo is a 100% subsidiary of Dongwoo Fine- "We will hard-coat transparent PIs and deliver them to Samsung."

Sumitomo mentioned the supply of Samsung Electronics in June. Sumitomo Chemical President Tokura Masakazu said in a briefing on the management strategy, "Samsung Electronics decided to adopt the foldable smart phone, which will be launched in 2019," the Japan Daily reported. At that time, there was no confirmed authenticity among those involved in the actual development. This is because several companies were testing transparent PIs.

As Sumitomo becomes a supplier, Kolon Industry's attention is focused on its response. Kolon Industries is expected to have a chance to supply Samsung once again as the Samsung fold-back mobile phone boasts popularity and its production volume will increase or the next model will emerge. It is also expected to actively promote diversification of customers.

The current folder is known to be prepared by Huawei, Oppo and Xiaomi in addition to Samsung Electronics. Foldable display is being developed by Samsung Display, LG Display, and BOE. Kolon Industries is expected to supply them to these smart phones and display makers.

Kolon Industries said, "As the launch date of the folder is not yet known, we are continuing to work on quality approval (specification), responding to changes in specifications and requests for improved products."