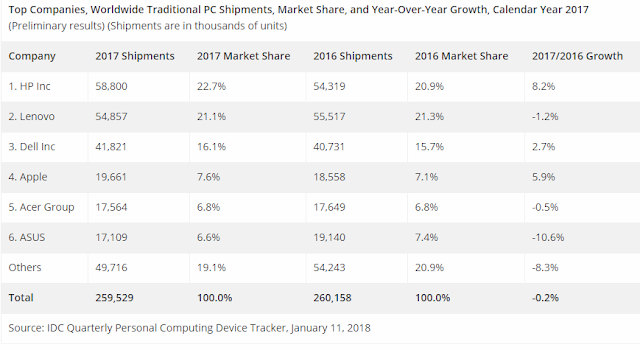 Some IDC estimates prior to financial earnings reports.

Shipments include shipments to distribution channels or end users. OEM sales are counted under the company/brand under which they are sold.

Traditional PCs include Desktops, Notebooks, and Workstations and do not include Tablets or x86 Servers. Detachable Tablets and Slate Tablets are part of the Personal Computing Device Tracker, but are not addressed in this press release.

Data for all companies are reported for calendar periods. 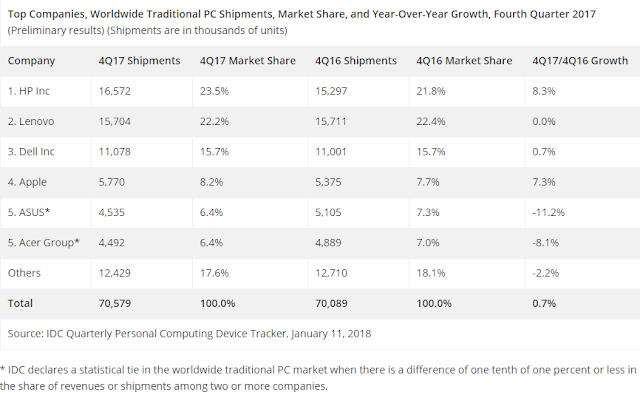 Worldwide shipments of traditional PCs (desktop, notebook, and workstation) totaled 70.6 million units in the fourth quarter of 2017 (4Q17), recording slightly positive (0.7%) year-on-year growth, according to the International Data Corporation (IDC) Worldwide Quarterly Personal Computing Device Tracker. The results outperformed the forecast of a 1.7% decline in shipments during the quarter.

The 4Q17 results further validate the view of a steadying, albeit still weak, traditional PC market, buoyed mainly by commercial upgrades and pockets of improving consumer PC demand. 2017 ended with an annual shipment volume of 259.5 million units, which represents a year-over-year decline of 0.2%. This makes 2017 the most stable year the market has seen since 2011.

Aside from commercial demand, 2017 was further helped by several other factors. Although the situation improved as the year progressed, the shortage of key components such as SSD (Solid State Drives) acted as a major driver of shipments for much of 2017, with top PC companies vying to lock up supply ahead of price increases and thus boosting orders. In response to the contracting tablet market, companies also returned their focus to the notebook market, shifting the product mix to appeal to key user segments and expanding the number of slim, convertible, and gaming systems.

From a geographic perspective, the emerging regions were helped by a more favorable comparison against the tough market conditions in 2016, with Asia/Pacific (excluding Japan) (APeJ) and Latin America both producing positive fourth quarter results. The United States remained a challenging market while Europe, the Middle East and Africa (EMEA) was stable and Japan continued to make steady gains with its sixth consecutive quarter of year-over-year growth.

"The fourth quarter results showed some potentially encouraging headway against the difficult environment in retail and consumer PCs," said Jay Chou, research manager with IDC's Persona l  Computing Device Tracker. "Enticed by a growing array of products that promise all-day battery life, high portability, and address emerging use cases that require more compute power, pockets of the consumer base are taking a serious look at these revamped PCs. However, the overall PC market remains a challenging one."

"The solid holiday consumer sales provided enough momentum for the PC market to stabilize a bit further," said Neha Mahajan, senior research analyst, Devices & Displays. "However, the growing popularity of other mobile form factors continued to have a dampening effect and led the overall U.S. PC market to perform below expectations."

The United States market experienced a decline in shipments in the fourth quarter of 2017 with a drop in both notebook and desktop sales despite reports of a strong holiday quarter. Overall, total PC shipments for 4Q17 stood at 16.5 million units.

The EMEA traditional PC market continued to gain strength, thanks to notebook growth from ongoing and accelerating mobility adoption. In addition to being a traditionally strong quarter in the consumer segment, 4Q17 shipments in the commercial space were strong, particularly driven by renewal projects that were postponed earlier. The fast approach of the compliance deadline for GDPR (General Data Protection Regulation) in Europe and several reports of cyber security breaches made security a strong priority in the hardware refresh cycle among enterprises.

The APeJ traditional PC market came in above IDC's forecast in 4Q17. Good demand for gaming PCs and strong sales during the Singles Day promotion drove more shipments in the consumer PC market in China. In the ASEAN region, channel loading and promotions led to higher than expected sell-in in the Philippines and Indonesia. Elsewhere, weakening consumer spending after the Diwali festival impacted shipments in India.

The Japan traditional PC market exceeded IDC's forecast by a comfortable margin, achieving year-over-year growth of 3.8% versus the forecast of a 2.9% decline in shipments. The commercial segment seems to be driving this growth due to rising demand from Windows 10 migration (and the end of support for Windows 7 scheduled for Q1 2020).

HP Inc. pulled further ahead as the top company, maintaining its lead through every quarter of 2017. Shipments grew 8.3% compared to a year ago for the seventh consecutive quarter of positive growth and volume hit more than 16 million units for the first time since the third quarter of 2011. HP further consolidated its position in the U.S. market, growing its market share to 34%.

Lenovo was the number 2 company in 4Q17 with a flat quarter compared to 4Q16. It continued to weather tough conditions in the U.S. as it works through management transitions and channel changes. Outside of the U.S., Lenovo made solid gains growing 3.9% year over year with solid notebook shipments during the quarter.

Dell Inc. held the third position in 4Q17, posting year-over-year growth of 0.7% and shipping more than 11 million units for the first time in 2017. Competition in the U.S. market remained tough for the company as its U.S. share and growth both suffered. Elsewhere the company saw solid numbers.

Apple remained in the fourth position and grew its shipments 7.3% in 4Q17.

ASUS and Acer finished the fourth quarter in a statistical tie* for the fifth position. ASUS saw its shipments decline 11.2% year over year in 4Q17.

Meanwhile, Acer's focus on gaming PCs and related products, as well its presence in Chromebooks, helped it to close the gap with ASUS, despite a year-over-year decline in shipments.