It was the next step in the evolution of webOS 3.x, and a gambit to move webOS smartphones into the same space of consideration as Android and iPhone.
But in the end, it was none of those things. The Windsor (Not) never stood a chance of making outside the doors of the webOS campus in Sunnyvale. Too many factors conspired to keep this device out of the hands of customers new and old.

However we would have liked to have it. Don't you. 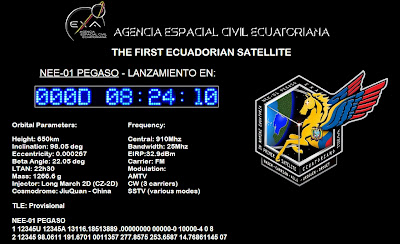 
Beginning this Thursday night and the dawn of Friday, Ecuador will form part of a privileged group in the United Nations—the Space Faring Nations—as soon as it puts in orbit its first satellite constructed completely in the country and by Ecuadorian hands.
The launch of the first satellite, named Ecuadorian Spaceship Pegasus 01 (NEE-01Pegaso) and constructed by the Ecuadorian Civil Space Agency (EXA, Spanish acronym), is scheduled for 11:13 PM local time, this Thursday (04:13 GMT Friday) from the Jiuquan cosmodrome, in China.
This event, of the utmost importance for Ecuador, will be transmitted between 10:30 PM and 11:30 PM on national television and radio channels, and via internet on the website:http://www.earthcam.com/world/ecuador/ecsa/, informó EXA.
During the transmission, one will be able to watch the launch of the Chinese rocket, LM2D (carrier of the satellite), and one can immediately observe through simulations and technical data how the satellite is put into orbit, explained cosmonaut Ronnie Nader Bello, leader of the project.
Náder will command the satellite’s flight operations from the Integrated Security Center ECU-911 in Samborondón, where President Rafael Correa is scheduled to arrive, as well as other State authorities to participate in the historic act.
The National Government, through the National Secretariat of Science, Technology and Innovation (Senescyt), the Coordinate Ministry of Security, and the National Secretariat of Intelligence (Senain, Spanish acronym) have supported this project of the EXA agency.
The Pegasus has a cube form, 10 centimeters by 10 centimeters, with 75 centimeter panels and a weight of approximately 1.2 kilograms. It’s calculated to be in orbit until 2018, while the satellite NEE-02 Krysaor, whose launch is scheduled for next August from Russia, will be in orbit until 2025.
The cosmonaut from Guayaquil explains that Pegasus is the first nano-satellite capable of transmitting live video from space, as well as the first of its class to possess a shield capable of resisting solar flares. It’s also the first in its category to carry multiple, foldable solar panels. “It’s the only one in Latin America constructed without foreign help; it’s 100% Ecuadorian and, with pride, carries the phrase Hecho en Ecuador (Made in Ecuador) on its structure, he states.
The satellite was constructed in secret for almost two years with the help of a 60 person team, everyone with at least a PhD in aerospace engineering and a budget of no less than a million dollars—the majority being state resources and a part from private capital.
Náder discloses that it took him at least a year of practice with the terrestrial station, Hermes-A, where he learned to fly more than a dozen satellites, to pass uncountable hours researching, experimenting, and finding errors, to carry out tens of calculations of more than 1,500 variables, to have steady hands to solder components smaller than 1 millimeter, and to have patience to build a printed circuit.
“It took a lot of courage to construct battery banks capable of vaporizing a human being at the first error, to spend hours in a tower 20 meters above the ground, to climb hills on bicycle to do transmission tests, to have an almost demented imagination to find solutions that others would not even dare to imagine, more than 600 hours of tests, a year without sleeping well and, above all else, a lot of Ecuadorian coffee,” highlights the commander in a letter.
The effort, he says, has also included personal sacrifice, limiting family time, “but the prize exceeds that price many times over: We have created the first Ecuadorian satellite.”
For Náder, the feat of entering the list of Space Faring Nations signified that the people have surpassed their adolescence and become adults, because they understood that their survival and independence also depend on their presence in space.
The cosmonaut reveals that the name Pegasus comes from the Greek myth of the flying horse on which the hero, Perseus, gained freedom and progress for his people, but, furthermore, he tells of another more personal reason for having baptized the satellite with that name.
He explains that, as a child, after his mother put him to bed, she would put on a series of animated shows, whose protagonist was Pegasus. “One fine day, they didn’t play the program anymore and I landed here. Years after, when I was 13, again looking at the stars, I dreamed of constructing my own space ship and I swore that, if I achieved it one day, that ship would be called Pegasus.” 40 years later that dream came true for Náder, who said, convinced, that Ecuadorians are capable of achieving many great things.

About EXA
The Ecuadorian Civil Space Agency EXA was founded on November 1st, 2007, in Guayaquil, as an independent, civil organization to administer and carry out the Ecuadorian Civil Space Program, and to develop scientific research in the fields of planet sciences and space sciences.
EXA counts on the endorsement of the Ecuadorian State, through the Ecuadorian Air Force, with which it maintains a narrow relationship.
The Agency operates through its Division of Planetary Sciences, the first and only observatories of ultraviolet radiation in Ecuador, located in Guayaquil and Quito and, through the National Radiation Monitor of UV, reports the levels of ultraviolet radiation that arrive to these cities in real time, thereby providing protection.

WebOS is a Linux-based operating system developed by Palm and later acquired by HP and then LG Electronics.

HP terminated its WebOS TouchPad tablet in 2011 due to slow sales. The US giant plans to launch its Android-based consumer tablet, the Slate 7, in Thailand by September at US169.

Thitaphon Boonprasit, director of printing and personal systems at HP Thailand, said the company is focusing on tablets as a strategic business to drive revenue growth.

Tablet sales in Thailand are expected to reach 3.5 million units this year, he said, while the local notebook market will probably see a slump or 5% growth in the best case.

HP is introducing its ElitePad 900, running the Windows 8 operating system and priced at 25,990 baht.

"We aim to be the market leader in the enterprise tablet market in Thailand," said Mr Thitaphon.

He noted the trend of businesses choosing tablets instead of notebooks as employees increasingly carry their own personal devices to work _ as many as 21% of workers at multinational firms, surveys show.

One market research firm has said Thailand's commercial notebook market will see zero growth this year for the first time.

Commercial notebooks account for 25-30% of overall sales of 2.2 million notebooks in the country.

Mr Thitaphon said HP expects commercial tablet sales to contribute 70% of total revenue this year, with the remainder to come from consumer tablets.

LG Electronics (LG) today announced that Spotify will be available on its 2013 range of smart media products, including premium Blu-ray Home Cinema Systems and Blu-ray players. Available on a selection of LG’s latest internet connected devices from next month, the Spotify application will provide users with access to over 20 million songs via the brand’s user friendly smart platform.

The new Spotify application will allow premium account users to discover new music by browsing the huge song library, or by listening to Spotify Radio on their LG Smart audio or video device. Favorite tracks and playlists can be shared via Facebook and Twitter so that everyone can discover new music. New customers to the service can also enjoy the benefits of a one-month free trial, before signing up to the $9.99 monthly subscription.

This exciting service will be available on a selection of LG’s devices, including its high-quality BH9530TW, an industry leading 9.1 channel system that offers the most immersive home cinema experience yet. With 1460W of power and nine speakers, the BH9530TW delivers breathtaking 3D sound that will fully submerge audiences in their favorite movies or music from every angle.

LG continues to lead innovation in audio visual entertainment, with the new Spotify application joining the company’s already impressive smart offerings – a one-stop shop for premium content, social media and gaming. LG’s smart platform brings together the best of catch-up TV from the likes of BBC iPlayer, instant access to movies on demand via Netflix and LOVEFiLM, along with social media platforms YouTube, Facebook and Twitter.

“LG’s smart platform provides unparalleled choice for consumers and the addition of Spotify demonstrates LG’s continued commitment to growing the brand’s smart offering for consumers,” said Richard Choi, head of LG’s Smart Business Group. “We are confident that LG smart media owners will enjoy these latest services, as well as the fantastic updates we have planned for the rest of the year.”

“It’s our mission to make all the world’s music available instantly to everyone, everywhere, so we’re delighted to partner with LG to make our music service available on their smart media devices,” said Kate Opekar, Director of Hardware Business Development at Spotify. “Spotify wants to be at the heart of the home entertainment experience, so it’s a natural fit to make our music service available on Blu-ray players and home cinema systems.”

Pre Order the brand NEW  Samsung Galaxy S4  On Amazon store and you will recieved it in late April or beginning May. Click on the Amazon banner below: